After one of the Canberra Modern Quilt Guild’s members had seen so many great charity quilts at the previous years’ QuiltCon, she inspired the Guild to create our own version for 2018.

With the theme of “modern traditionalism”, we wanted to use a base block that we hadn’t often seen used in modern quilts. We also wanted a block that everyone in our guild could help with, whatever their experience level in modern quilting.
Guild member Carolyn Goonrey came up with a few designs using the rail fence block. This was refined to the final design, which used space and colour to explore what a fence and boundary means.

This theme and block resonated strongly with our Guild, as planning regulations in Canberra don’t allow front fences. Instead, people find other ways, such as fences made of shrubs, to put in barriers around their houses.

When talking about the theme of fences, we also reflected on the many conversations taking place in Australia around refugees, and the hardline stand that the Australian Government takes.

We called this quilt “Don’t Fence Me Out” to reflect how we want to be more open and inviting to our neighbours and refugees.

Once the design was finalised, Carolyn set up foundation paper piece patterns. This ensured that regardless of different skills, machines or seam allowances, the final blocks would all be consistent.

The first group of blocks were made at our annual Canberra Modern Quilt Guild show to demonstrate the work the Guild does. Blocks were also given to interested members to put together. Our September 2017 sewing day had Guild members working hard to finish the remaining blocks. After a final sewing bee weekend at a member’s home, the top was finished.

To keep with the theme, we wanted to quilt “welcome” in different languages that reflect the heritage of our members, as well as the Ngunnawal and Ngambi peoples – the Traditional Owners and custodians of the land where the city of Canberra was built.

These words were then quilted across the quilt, along with straight lines to reflect the borders and boundaries that are around us all. A floral motif was added to represent the Canberra bluebell, the floral emblem of the Australian Capital Territory.

It was great fun working with the guild to pull this together. After being displayed at QuiltCon 2018 in Pasadena California, the Guild will use the quilt to support a local charity benefiting refugees. 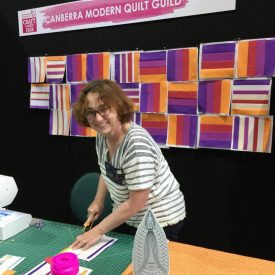 CQMG member putting blocks together at our annual show.

All the finished blocks. 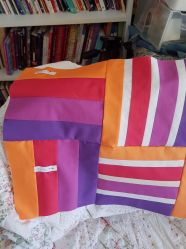 putting together the sections.

putting together the sections. 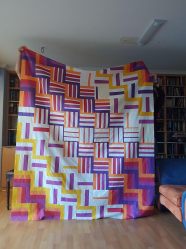 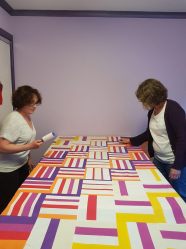 Another month gone by and it’s meeting time again! First up, the meeting details:

This month we are going to have a BYO project night.

We are expecting to have a large show and tell as there will quite a few quilts that were exhibited in Berry to get through (those who exhibited, please do bring your quilt along).

Also, we have received the Michael Miller Challenge fabrics to distribute so we’ll have those to cut and hand out.

With all that will be happening, we thought it would be good timing for a BYO sewing night – bring your own hand work project to work on. Anything you can work on by hand, for example some binding or hand piecing, quilting, or perhaps it could be a good opportunity to get those labels on your quilts!

Now, onto the exciting part, our news!!!

Addicted to Fabric in Phillip have very kindly offered to host our Guild for sewing days every two months on a Sunday beginning on June  EDIT: DUE TO UNFORSEEN CIRCUMSTANCES, THE FIRST SEWING DAY WILL BE JUNE 22 FROM 9AM TO 4PM. We will then be there the second Sunday of August, October and December. We’re very grateful to A2F for allowing us to use their facilities and also really excited to be having regular sewing days. There will be more information at the meeting, looking forward to seeing you all there!